2013 looks to be a bumper year for Irish craft brewing. With Mountain Man launching shortly, to be followed by Holy Mountain, 9 White Deer and several others, the prospective is one of greater choice than ever before for the beer consumer.

The established microbreweries, meanwhile, are struggling to keep up with demand, and two of them have recently undertaken expansion work.

The Galway Bay Brewery opened at The Oslo in Salthill, Co. Galway in 2009. The brewkit was a modest 10hL set-up in a rear corner of the building. Since opening, however, the Cottage Group of pubs which owns the brewery has expanded significantly and now carries three to four Galway Bay beers in seven pubs in Dublin and Galway as well as the brewpub itself. With plans afoot to launch the range in bottles too, the need for greater capacity was obvious.

Space has been found on the Oslo premises to double the kit size and a 20hL brewhouse is now under construction. The open fermenters will largely be replaced by sealed unitanks allowing a much greater degree of control over each batch. A smaller pilot brewery is also to be installed, allowing what head brewer Chris Treanor describes as "more adventurous brews" to be produced. The new area is split over two storeys, allowing for a on-site malt store as well as a laboratory.

The new brewkit arrives next month and Chris is hoping the first beer from it will be flowing in July.

Meanwhile, the elder of Co. Donegal's two breweries -- Kinnegar, established 2011 -- is also in the process of increasing its capacity, "from tiny to just plain small" says proprietor Rick LeVert. A purpose-built brewhouse is almost finished at time of writing, occupying a compact 100 square metres on a farmyard site overlooking Lough Swilly.

The brewery will be home to a two-vessel brewkit plus three cylindrical fermentation vessels and a number of conditioning and bright beer tanks. Determined to keep the business on a farmyard scale, the new Kinnegar brewery will be creating its beers in 10hL batches.

June 2013 is the month Rick expects his hair to go grey, with the expected completion of the building, delivery of the equipment and -- all going well -- the first brewday. You can see pictures of the new brewery and follow developments as they happen on the Kinnegar Brewing website.

Beoir wishes every success to both projects and we look forward to tasting the new beers.

Black's Kinsale Craft Brewery is one of the newest arrivals on the rapidly growing Irish craft beer scene, founded by Beoir member Sam Black. So far one beer has been produced under the brand -- Kinsale Pale Ale -- which already has a medal under its belt, winning bronze at the recent Alltech Dublin Craft Cup. Sam is currently producing his beer at the Eight Degrees brewery but has plans to set up his own kit in the town of Kinsale itself, and that's where you step in.

To get things moving, Sam is seeking crowd funding via the IndieGoGo website. It's not the first time an Irish brewery has taken this approach to financing, White Gypsy ran something similar earlier this year via Linked Finance. While White Gypsy's scheme was more a call for investors seeking a monetary return, Kinsale's scheme on IndieGoGo is offering a range of unique and exclusive incentives for investors over a range of prices.

Just €5 will ensure your name is etched on the sponsor's wall in the brewery, while at the upper end €1,000 buys you your own personalised batch of beer: 200 bottles of your ideal brew, created under your supervision and personalised with your own label. In between there's a wide range of other items available, including t-shirts, brewery tours, tankards and three exclusive yet-to-be-brewed beers, a double IPA, black IPA and imperial stout, created in a strictly limited edition.

If you want to lend some direct support to Irish craft brewing, avail of exclusive one-off beers or just have your name recorded as one of the people behind this part of Ireland's beer revolution, check out the Kinsale Craft Brewery project at IndieGoGo before September 15th.

Update: Beoir is aiming to commission a special batch of custom beer from the new brewery. If you'd like to be one of the twenty people involved, pledge your support here.

ICB Tasting at the Bull and Castle

The management at the Bull and Castle have kindly offered to let ICB members to bring their own beers in to the Beer Hall for a tasting evening on Thursday the 19th of July. This is only the second time ICB members will have the oppertunity to get together to try each others beers, and being in the Beer Hall we will also be able to compare to commercial examples of the chosen styles for the evening; American IPAs and Wheat Beers.

To register your interest in attending, and to let us know what, if any, beers you are bringing, please see the thread in the Events forum. If you don't have beers of the chosen styles, or are a non-brewing member, don't worry! Pop along to have a taste and meet other members of the community.

We intend starting around 7pm. Looking forward to an evening of fine beer and chat.

If you have been following this thread in the forum you will know that I have made a submission to the Alcohol Advisory Group on behalf of the members of this website.

Thanks to TheBeerNut for the idea and taking everyone's opinions, expressed over a six page long thread and melding them into a coherent whole.

The group will be making their recommendations to the Minister for Justice, Equality and Law Reform by the 31st of March 2008.

The document was submitted via email earlier today. Download the full text here.

After a one-year hiatus, the Independent Craft Brewers of Ireland are bringing Indie Beer Week back for 2021. The event will run from 17th to 23rd May.

This year, unsurprisingly, the action will be largely virtual, centring on online tasting events organised by Craic Beer Community, facilitated by BeerCloud.ie. 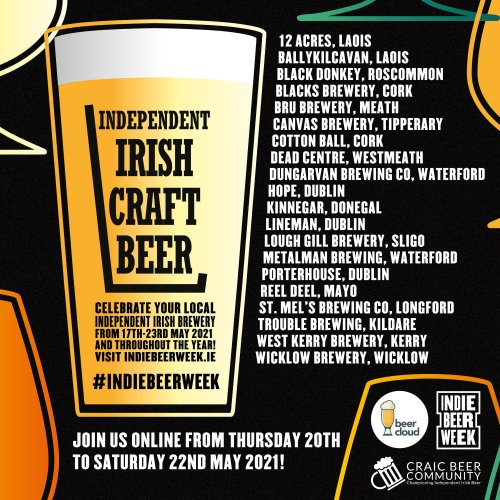