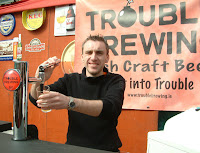 For those who weren’t at the ICB brewery tour at Trouble HQ recently, we announced a tentative plan to hold a brewing competition. The competition will select a home-brewed beer to be scaled up to a commercial batch size in our Allenwood brewery and be sold at the Franciscan Well Easterfest in 2011.

The aim is to keep it as open as possible, however for practical reasons it is necessary to put a couple of limitations on the beer brewed.

A panel will be set up and judging will be done at a blind tasting to take place after the closing date.

The beers will be scored on three main criteria:

It should also be noted that the beers will be judged on the criteria listed above and that the beer’s ability to appeal to a mass market is not a factor.

The winner will get to see their winning recipe being brewed up on our system and they can spend the day in the brewery while it is brewed. We will then have the beer for sale at the Easterfest Beer Festival at the Franciscan Well in Cork next year (and possibly others).

The winner will also receive a hamper with a selection of world beers and a voucher for a meal for two at a gastro pub.

Alas, the prize won’t include the proceeds of the sale of any resulting beer, as brewing commercially is an expensive business and costs need to be paid. Always remember though, the adulation and plaudits of your fellow brewers is priceless.

Closing date for entry is 31/10/10 and each entry should contain two 500ml bottles of beer and be accompanied by a list of all ingredients and a short story behind the beer, no longer than 200 words.

We've had a number of questions asking where and when people can drop off beer. I'm pleased to say that Geoff from the Bull & Castle in Dublin 2 and Dave from the Bierhaus in Cork have kindly agreed to do us a massive favour and allow people to use their fine establishments as drop-off points for the beer for this competition. Not to mention you can sample some of the great beers that they serve when you're there. Win-win I say.

Though we would ask people to only drop off beer in the last week before the competition closes, i.e. (23rd October - 31st October). We've given official permission for Geoff and Dave to drink any beers that are submitted outside these dates. It'd be a terrible shame to miss out on the competition due to your beer being stuck inside the bellies of the bar staff...

If you can't get to either the Bierhaus or the Bull & Castle, you can send us the beer in the post. The address is:
Trouble Brewing,
Allenwood Enterprise Park,
Allenwood North,
Naas, Co. Kildare.

Though the usual disclaimers apply, in that, once the bottles enter the vagaries of the postal system, nothing is guaranteed until they reach us. So pack 'em up well, loads of bubble wrap (and not just cause the byproduct is tons-o'-fun for us).

We'll announce the full list of entries and the date of judging after the competition closes. Think that's all for now, as always, questions, comments, are welcome at This email address is being protected from spambots. You need JavaScript enabled to view it..